Following the loss to Perth Scorchers in their previous outing, the Sydney Sixers will look to get back to form and maintain their formidable performances in their forthcoming fixture against Melbourne Renegades. The Sixers are currently riding high on top of the Women’s Big Bash League (WBBL) table with 12 points after having won six fixtures in their eight outings, with their most recent match being a defeat at the hands of the defending champions Perth Scorchers.

On the other hand, Melbourne Renegades have just not been able to hit the ground running and project strong performances on the pitch. The Renegades have won just one off their last five matches as they are second from the bottom of the table as things stand. The side endured a dismal outing against Hobart Hurricanes as the match went on to be a low-scoring game. The Melbourne franchise were all out for just 80 runs in under 18 overs and the Hurricanes comfortably chased the total in under 11 overs.

Their last encounter against the two-time champions, Sydney Sixers was also poor for the side as they eventually lost the match to the rival side. The Sixers posted a massive total of 188 in their stipulated 20 overs with strong performances coming from Alyssa Healy (78 off 54 balls) and Suzie Bates (66 off 47 balls). In response, Carly Leeson was the only player from the Renegades who could manage to put up a show as she scored 52 off 32 balls but that was not enough for the side to get ahead in the match. Sydney Sixers will look to get back with a win and maintain a new winning streak.

The surface at Junction Oval has favoured the team batting first by a small margin considering the history of T20 matches played on the pitch. Match is not expected to be overly high-scoring as bowlers can extract a lot from the surface. The two sides may choose to bowl or bat first depending on how they want to test themselves.

The Sydney Sixers’ skipper, Ellyse Perry was terrific in her previous outing against Perth Scorchers as she scored an unbeaten 69 off 58 balls at a strike rate of 118.97 despite the side losing to the defending champions. Perry will look to maintain the flamboyance in her batting in her next outing against the Renegades.

Ashleigh Gardner, another one of the Sixers has been sensational with the ball with her off-break. Not only can she scalp wickets and provide breakthroughs but also adds a lot of value with her economical figures. The Renegades will find it tricky to read her deliveries in the forthcoming fixture. 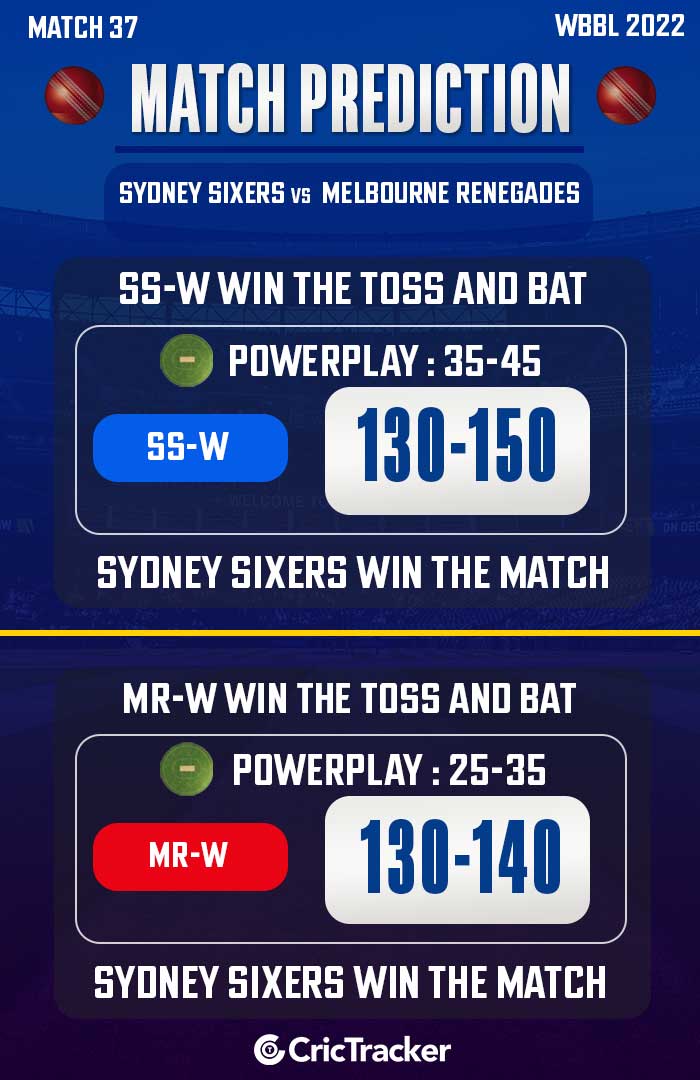