Melbourne Renegades (REN) will battle it out with Adelaide Strikers (STR) in the 54th match of the Big Bash League 2022-23 at the Docklands Stadium on Tuesday, January 24. Melbourne Renegades are coming into the game, having suffered two consecutive losses. Despite the defeats, Aaron Finch & Co. currently stand fourth on the points table, with six wins under their belt and they would look to register a victory against the Strikers to move to the third spot.

Adelaide Strikers, on the other hand, are in a precarious situation, having lost four games in a row. Travis Head & Co. are sixth on the table, with ten points to their name, and the coming encounter will be a do-or-die clash for them. A win against the Renegades will provide them a glimmer of hope to qualify for the playoffs.

Docklands Stadium has offered is a batting-friendly surface. However, there is some bite on the surface, which assisted the pacers. Three out of the last four matches played here have been won by the team chasing and therefore, the side winning the toss will want to have a go with the ball first.

Aaron Finch has been a run-bank for Melbourne Renegades in the ongoing edition of the BBL and has notched up 355 runs in 13 games at a strike rate of 123.69. The ace batter would look to continue on his rich vein of form and display his batting might against the Strikers.

Thomas Rogers has set the Big Bash Lague 2022-23 on fire with his sensational performances. The 28-year-old has featured in 13 matches and picked up 20 wickets at an economy of 8.66. He would to look to carry on the good work and put up a show with the ball in the coming game. 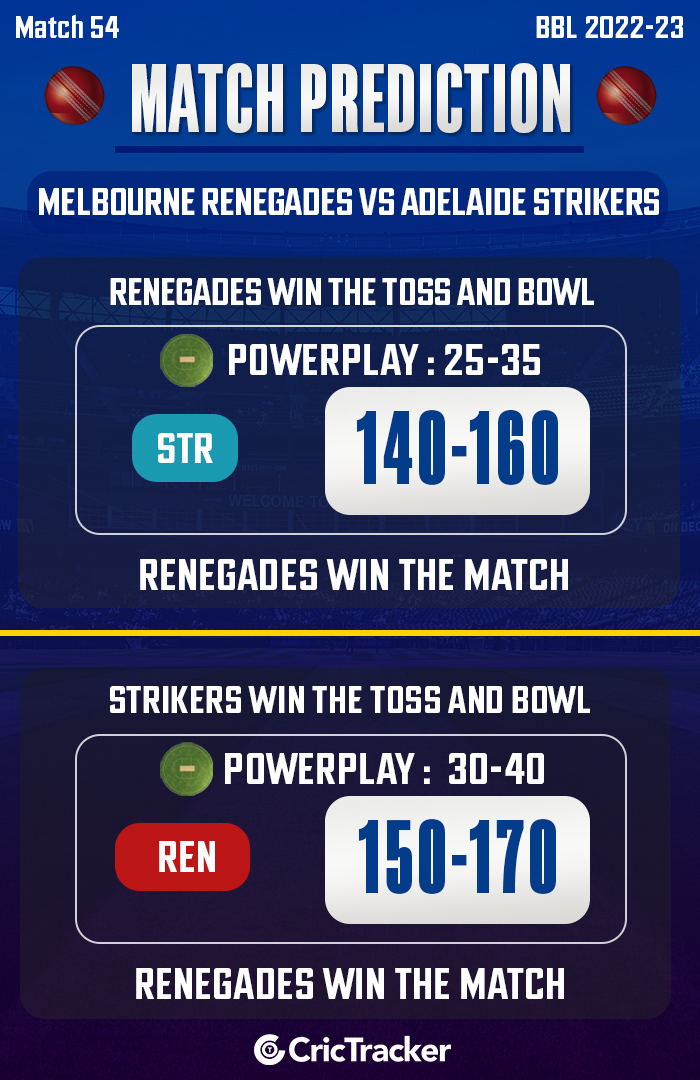