Pakistan will kick-start their ICC T20 World Cup 2022 campaign against arch-rivals India at the Melbourne Cricket Ground on Sunday, October 23. The Men in Green come into this tournament riding high on confidence after emerging triumphant in the New Zealand T20I tri-series recently.

Pakistan would be eyeing a second straight T20 World Cup victory over the Indian team, having gotten the better of them by ten wickets in the last edition that was played in the UAE. The two teams had locked horns twice in this year’s Asia Cup. While the Men in Blue came out on top by five wickets in the group stages, Pakistan gave it back to them by the same margin in the Super 4 clash.

The Babar Azam-led side will be very relieved that Shan Masood has cleared the concussion test and been declared fit to take part in this high-voltage contest. Pace spearhead Shaheen Afridi who is returning from a knee injury will look to test the Indian batters with his thunderous yorkers with the new ball.

Here’s Pakistan’s Playing XI for the Super 12 encounter against India: 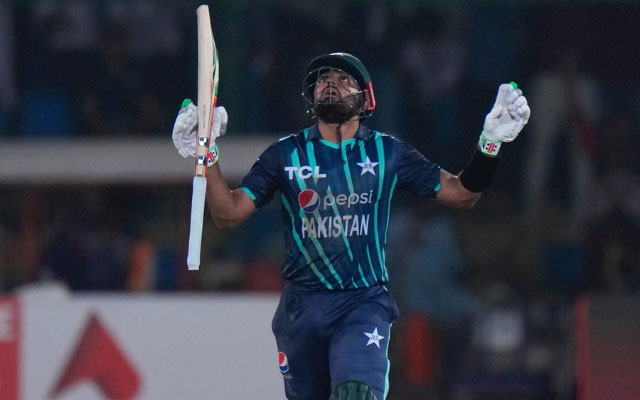 The onus would completely be on the opening pair of  Babar Azam and Mohammad Rizwan to lay a soild foundation for Pakistan throughout this T20 World Cup. Babar has been very consistent across formats for the last few years and was the leading run-scorer of the last edition. Thus, the Pakistan captain would be hoping to play a decisive role in helping his side get off to a winning start.

Rizwan has been scoring runs consistently in the last 12 months and is currently the top-ranked T20I batter. He has been doing the bulk of scoring along with Babar and sometimes single-handedly when the other batters fail miserably on a given day. The wicketkeeper-batter was the highest run-getter of the Asia Cup with 281 runs from six innings. Shan Masood had to patiently wait for his chance to shine at the big stage after showcasing consistent performances in domestic cricket over the last few months. Masood has the potential to be a game-changer with his impactful knocks and with the added ability of scoring runs at a quick pace.

Haider Ali is one of the promising youngsters who are yet to prove their mettle on the 22 yards. He might be the first-choice middle order batter ahead of an inconsistent Khushdil Shah and would be expected to handle responsibilities in the middle order. The emerging batter can be a difference-maker with his cameo knocks.

Iftikhar Ahmed has not been a reliable middle order batter for the last couple of months, but even he has some reputation of playing cameos and scoring some vital runs for Pakistan. He scored 105 runs from six matches in Asia Cup 2022 averaging 26.25.

Asif Ali can be a match-winner for Pakistan on his day just like the Asia Cup 2022 Super 4 encounter against India. Nonetheless, the power-hitter has been under fire and struggling to time the ball for a while and the blockbuster clash against India would be a good opportunity for him to regain his mojo with the bat. Shadab Khan is known for his ability to bamboozle any batter with his leg spin and can also take the match away from the opposition with his impactful knocks lower down the order. The Pakistan vice-captain registered eight scalps under his name in the Asia Cup averaging 14.13 and scored a crucial 36 against Afghanistan in Super 4 when the Men in Green had suffered a batting collapse.

Mohammad Nawaz had shocked India during the Asia Cup 2022 Super 4 encounter with a blistering 42 runs off 20 deliveries which turned out to be a match-winning one. Nawaz also registered eight scalps in the continental tournament averaging 13.75. Naseem Shah had troubled the Indian batters with his pace and accuracy in the Asia Cup 2022 group game. Naseem has the ability to provide early breakthroughs with the new ball and can also bowl wicket-taking spells in the middle overs.

Haris Rauf has been consistent with his line and length in the last couple of months. Pakistan would be relying on him to keep the batters guessing at the death. Rauf finished with eight wickets each in the Asia Cup as well as in the subsequent home series against England.

Shaheen Afridi seems to have got accustomed to the Australian conditions as he bowled some fiery yorkers in the warm-up fixtures against England and Afghanistan respectively. He would be looking to send the famed Indian top order to the pavilion early on.