Delhi will clash against Rajasthan in the 41st match of the Vijay Hazare Trophy 2022 at Eden Gardens in Kolkata on Tuesday (November 15). Delhi beat Meghalaya by eight wickets in their second game.

Shivank Vashisht, Pradeep Sangwan, and Nitish Rana took two wickets each to restrict Meghalaya on 216/7 while bowling first and then Himmat Singh, Shikhar Dhawan, and Yash Dhull scored half-centuries to record an easy eight-wicket win. Delhi beat Vidarbha by five wickets in their first Vijay Hazare Trophy game and are now placed in the third position in Group B with eight points from the opening two matches this season.

Rajasthan registered a big seven-wicket win against Sikkim in their last game after a shocking defeat against Assam in their opening clash this season. Star spinner Rahul Chahar took five wickets and Ravi Bishnoi grabbed four to bowl out Sikkim on just 110 while bowling first and then opener Abhijit Tomar smashed an unbeaten 75 runs off just 50 balls to guide Rajasthan to an easy win. With one win and a loss, Rajsthan are placed in the fifth position in the Group B table with four points.

The pitch at Eden Gardens is a balanced one for the white-ball games. The average first innings score at the venue is 187 from seven Vijay Hazare Trophy matches. Teams batting first have won five of the seven games, and hence, the captain winning the toss is likely to bat first.

The young Indian batter smashed unbeaten 71 runs off 64 balls against Meghalaya to guide Delhi to a big win in the last match. He scored 37 runs against Vidarbha in the first Vijay Hazare Trophy 2022 match and now is leading the scoring chart for Delhi with 108 runs from two matches at a strike rate of 118.68.

The in-form Indian spinner is not part of the upcoming white-ball series against New Zealand despite showing consistency across formats. He took four wickets while conceding just 34 runs against Sikkim in Rajasthan’s last match in the tournament and has taken six wickets from the opening two matches so far. 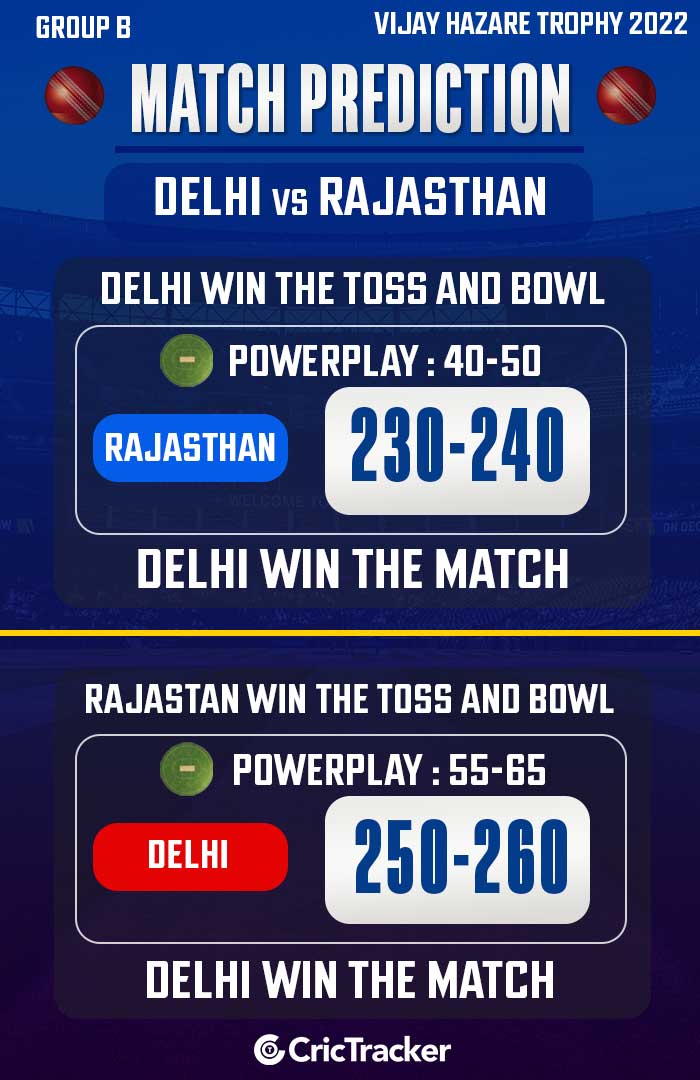