Skip to content
HomeSportsJHR vs KAR Match Prediction – Who will win today’s match?


Jharkhand will be facing off against Karnataka in the Elite Group B encounter of the Vijay Hazare Trophy 2022 on Tuesday, November 15 at the Jadavpur University Campus 2nd Ground in Kolkata. Both are the top two sides of the group and would be involved in a fierce competition to test each other’s capabilities on the field.

Jharkhand team has been outstanding so far and are the table-toppers, having won both their matches with eight points to their tally. Even the second-placed Karnataka also have the same number of victories and points. However, it is a superior net run rate that separates both sides.

The table-toppers from Group B will be locking horns with each other for the first time this season.  Karnataka have been impressive this season having reached the knockouts of the recently-concluded Syed Mushtaq Ali Trophy. They finished as the toppers of Group C with six victories from seven matches. However, their campaign ended after a close nine-run loss against Punjab in the quarterfinals.

Jharkhand, on the other hand, could not go beyond the group stages, having finished fourth in Group E with just two victories from six outings. However, taking their recent form into consideration, Karnataka need to be well-prepared in order to avoid their first defeat of this tournament.

The Jadavpur University Campus 2nd Ground is a balanced surface. The pace bowlers are expected to have an early advantage and the spinners will come into play during the middle-overs. The batters must bat on a cautious note and can score once they are well set. Therefore, the captain winning the toss will be looking to bat first and put runs on the board.

Virat Singh has been one of the most consistent batters of the Vijay Hazare Trophy 2022 so far and has made a tremendous impact on the 22 yards in the last couple of matches. Virat has amassed 125 runs from two outings averaging 62.50 and a strike rate of 82.24 including two half-centuries with his highest individual score being 75.

Rahul Shukla has showcased outstanding performances with the ball in hand so far. He has managed to bamboozle some of the good batters in this tournament and would be expected to continue the same against Karnataka. Shukla has registered seven scalps against his name from two matches averaging 5.57 and an economy of 2.66 including a fifer. 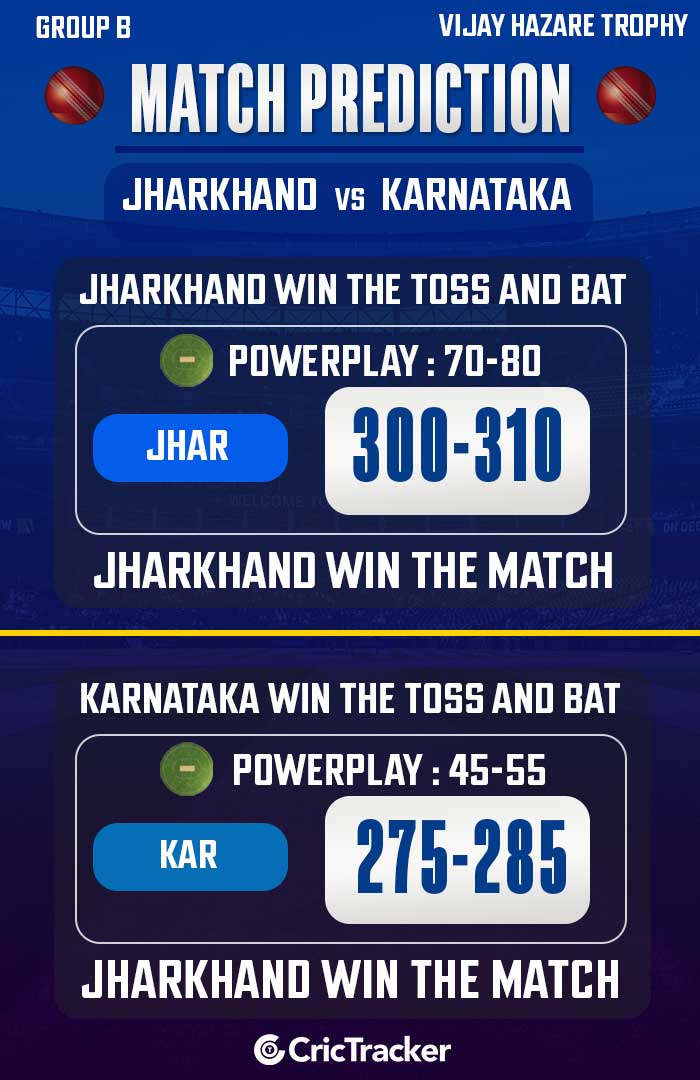