The South African team, despite how hard they work, fails to make an impact on the big stage – in ICC tournaments. They haven’t won a single edition of either the T20 World Cup or the ODI World Cup. After coming close to the trophy, they end up putting awful performances and crash out.

Not just once or twice, South Africa have bowed out of ICC events multiple times. That is the reason why they are infamously called ‘chokers’ of cricket. Be it group stage exits, or crashing out of knock-out stages, the Proteas have been disappointing their fans for quite some time now even after entering global tournaments as a formidable force. 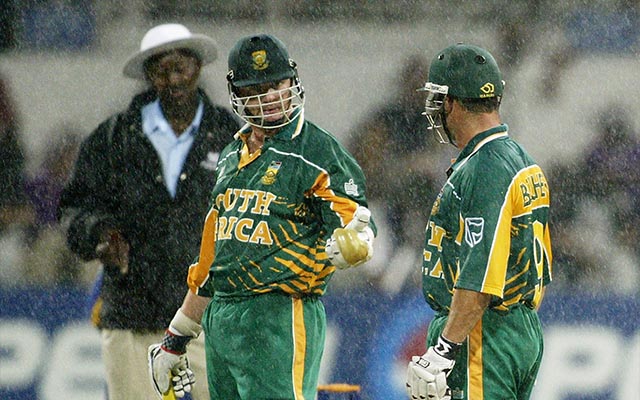 South Africa was hosting the tournament, and despite having the advantage of playing the games on their home soil, the Proteas failed to create an impact and lost two games early in the group stage fixtures, one against the West Indies and the other against New Zealand.

In order to make it to the Super Six, the Shaun Pollock-led South Africa had to win their crucial contest against Sri Lanka. The islanders posted a target of 269 runs for the South Africans to chase. Graeme Smith and Herschelle Gibbs got off to a good start as they shared a 65-run opening stand.

But they underwent a terrible collapse and were reduced to 149/5 from 90/1. Mark Boucher and skipper Pollock anchored the innings in the middle and took the game close but rain played spoilsport and hampered South Africa’s chances. The Proteas managed to level the DLS par score when rain stopped play, but the game never resumed and the hosts were knocked out of the tournament.