Cometh the ODI series against New Zealand, the team India management would look to fill in the gaps and prepare a strong squad for next year’s ODI World Cup. With almost ten years without any major trophy, Rohit Sharma and the company is likely to act strict going forward as team India faced a massive issue with the number four spot in the 2019 version of the tournament. Despite Ambati Rayudu performing well, the cricketer was dropped for Vijay Shankar, which later became a massive failure.

In order to avoid such errors, consistency is one such thing that will be very important for every player in the future, especially in the series against New Zealand when a lot of senior cricketers have decided to take a break. The situation also invites pressure as there are cricketers who are yet to cement their place in the Indian team. Thus, the series against the Kiwis can either help them get an additional run or the fans might see them taking a break or end their ODI careers. 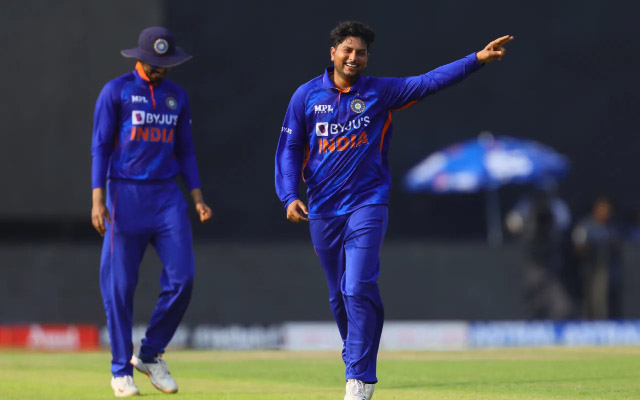 For the majority of Kuldeep Yadav’s time in ODI cricket, he was former captain MS Dhoni and Virat Kohli’s go-to bowler in the format. Alongside Yuzvendra Chahal, he used to destroy the opponent in the middle overs, giving India the advantage. However, the left-arm spinner failed to remain consistent and eventually lost his place in the Indian team.

With the next year’s ODI World Cup scheduled to take place in India, Kuldeep can be a very lethal option for Rohit Sharma. He is someone who can be very difficult to read but at the moment, Yadav is pretty behind in the pecking order. With Chahal, Ravichandran Ashwin, Ravindra Jadeja, Axar Patel and Washington Sundar performing well, Kuldeep will be under tremendous pressure to deliver good performances on a consistent basis.

In 72 ODIs so far, the Kanpur-born spinner has picked up 118 wickets at an economy of 5.19. Even though he can be costly at times, the spin wizard is capable of picking wickets at regular intervals. In the recently concluded Syed Mushtaq Ali Trophy, Kuldeep picked up just three wickets in four matches. However, in India’s last ODI series against South Africa, he picked up six wickets, including a four-wicket haul at Delhi.